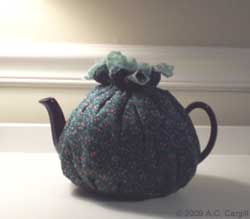 Grab a cup of tea and read my little tea tale. The moral is pretty simple: “Don’t be a hawk or a dove. Drink tea instead!” Of course, I realize that’s not always possible.

This tale is about a real hawk and a real dove (not just the cliché symbols for war and peace, respectively). First, I have to say that this is not about politics. It’s a true story of how tea gives me the caffeine I need to deal with conflict while remaining a peacemaker.

I need to relate this tale “from the top”, as they say in showbiz.

My husband and I were up early and had done our normal morning things, including brewing a 6-cup pot of Typhoo, warm in its tea cozy, to enjoy during the morning. He went into the music room to practice playing his piano compositions and an O’Carolan tune or two. I settled to my writing. After awhile, the piano music stopped. A few minutes later, my husband called me to come look out of the dining room window at a true nature story taking place in our yard.

We have several bird baths set up in that part of the yard and keep them filled with fresh water. This gives us free entertainment, seeing the local birds hedonistically availing themselves — drinking, splashing, chasing, and being chased by, other birds. Daily, a lone dove sits on the ground nearby. Sometimes it is joined by another dove, taking turns in the bird baths or bobbing along hunting for insects. All the while, they and other birds keep a wary eye out for predators such as dogs and cats.

Unfortunately, there is another predator that we have seen circling in the skies around us: a hawk. It was this hawk that my husband saw as he was passing by the window to the kitchen for a tea refill. A flash of wings and — whoosh! — the dove was a victim. I joined hubby at the window, mug of tea in hand, and saw the hawk standing near its prey. The dove was motionless and, quite likely, a goner. I took a gulp of tea and got the small pair of binoculars we keep handy to take a closer look at the hawk. It had a look that said “This dove is mine!” The dove showed no movement. We concluded that, indeed, the hawk had won. At that point, we were inclined to let the hawk have his meal and go back to our music and tea.

The hawk jumped up, startled, and attacked the dove again. It lay still again. Another minute ticked by. Hubby and I each took more swigs of tea. The dove moved again! The hawk jumped again. (Here’s where the drama heightened.) This time, the dove did not stay put to be attacked again. It scrambled away and was able to flutter its wings to get down the small retaining wall by the bird baths. At that point, we acted.

“Go scare it away!” I cried. (Must have been that tea caffeine kicking in.)

My husband ran out the patio door, clapping his hands. The hawk flew off, and the dove was now safe. (He has seen it since then, bruised but otherwise fine.)

Just goes to show that one shouldn’t be a hawk or a dove, but a tea drinker!

To all the little doves of the world who are standing strong against the hawks, I hold up my cup of tea and say, “Salute!”

2 thoughts on “Tea Tale — The Hawk and the Dove”