There have been a lot of posts talking about the proper way to brew tea.  All of them basically giving the same basic ideas, sometimes slightly different with brew times or temperatures , but what happens if you throw the rules out the window all together? 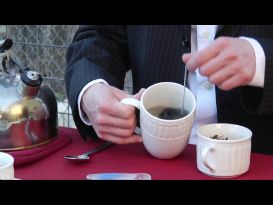 I know many people whose ideas on how to make tea consist of throwing a teabag in boiling water (no matter the type) and leaving it in there the whole time they drink the tea.  Places like Starbucks do little to change that mentality in fact they almost cater to it, but some people when they think of tea they love that bitter astringent taste that grabs hold of you and stays awhile.

It seems almost as though the “rules” of tea brewing are being ignored by some of the more knowledgeable people.  I’ve heard of a well respected tea enthusiast brewing greens with boiling water and flash infusions.  In certain Chinese communities the method of brewing they practice is called glass brewing, in which they have a jar, or glass with green or white tea on the bottom, and fill it up with hot water.  Once it is cool enough to drink, they drink most of it, and then add more hot water.  What you get when preparing tea this way is a very strong brew, which has every flavor very pronounced, but is also rather astringent.  Far from what we would consider the perfect cup of green tea, but these glasses and jars with tea and hot water seem to be everywhere in certain parts of the world.

Tea like art and so many other things is full of rules and guidelines in the beginning, but it seems the more you learn, the more you throw the rules out the window and improvise.  Yet there is one key rule in tea, it is to make good and enjoyable tea, right for your mood and your guests, but always exceptional tea.