One of the great pleasures of afternoon tea is surveying a beautifully set tea table. From the beginning, the vessels used in the preparation of tea have played nearly as major a role as the leaf itself. Think of the formal order of the Japanese tea ceremony, for example. The basic preparation of tea requires leaves, hot water, and a way to separate the two after steeping. Add in milk and various sweeteners, and the array of tea paraphernalia becomes quite dizzying in its broadness.

Let us address those tools of basic preparation: vessels and strainers. The earliest teapots evolved from Chinese wine ewers and were in common use by the time the Dutch began carrying tea from China to Europe in the late sixteenth century. These stoneware vessels were wide and squat with wide spouts to avoid clogging.

This particular teapot is an example of an 18th century English stoneware teapot in the Chinese style. It is currently on display at the museum at Gunston Hall in Lorton, Virginia.

Gradually, teapots evolved to have strainers built into their spouts, but until then, teapots and tea kettles were merely vessels.  In the 18th century, fashionable hostesses kept hot water in “tea kitchens,” silver urns that contained an iron ring that could be removed and heated to maintain the water temperature necessary to brew tea.  The hot water was then added to the tea leaves in porcelain or silver teapots. 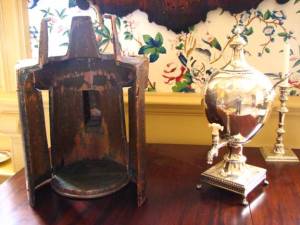 Here is an example of an 18th century tea kitchen and its original box, made of leather.  Once the tea had steeped and was ready for pouring, the leaves somehow had to be separated. Strainers might be used, early ones being made of twisted bamboo or wire. Before the modern tea strainer came along in the 1790s, hostesses would use a device called a “mote spoon” or “mote skimmer.”

This example dates from about 1750. The pierced bowl clearly was used to skim the tea leaves out of the cup or pot.  If you look closely, you will notice that the end of the handle tapers to a spike, which was used to remedy clogged teapot spouts.  Eventually, this design evolved into modern tea strainers.

This concluded today’s lesson on tea steeping and straining. Come back soon for more information about teapots, caddies, and tea services.

Check out more great stuff from Stephanie on her blog, The Tea Scoop!

One thought on “Tea Accoutrements”