I like both Redbush (Rooibos) and Honeybush teas, though both are actually the leaves of flowering legumes, and not really tea at all. Neither has caffeine, both are low in tannin, and both come from Africa. Both are rich sources of antioxidants. Both have naturally sweet undertones. Close cousins, both these herbs require a longer-than-Ceylon steeping, of 5-7 minutes. Because of the low tannin, the “tea” will tolerate this length without becoming bitter. Rooibos is only grown in South Africa, and Honeybush is rarer still, relegated to only the eastern and western cape regions of South Africa. Both are harvested by cutting and bruising, oxidizing (fermenting), then drying. Given the similarities, why choose one over the other?

Honeybush was one of the first black tea substitutes. There are 23 species, each with a slight varietal flavouring. Originally cultivated by hand in the mountainous regions of east coast South Africa, much honeybush is still hand picked today. However, in 1998, group of South African farmers formed the South African Honeybush Producers Organization (SAHPA), which promotes new growing and production techniques. As a result, two large Honeybush plantations have opened since 2001, as have many Honeybush research partnerships. If you have tasted this tea, more prolific Honeybush is a very good thing! This tea is usually composed simply of honeybush, which carries undertones of wood and honey. It is so aromatic that it can be steeped on the stove and left to scent a room. It is likened to a hot apricot or dried fruit mixture in taste and a bit of honey added while brewing enhances the natural flavour. It is said to have a stronger but more pleasant flavour, than Rooibos. 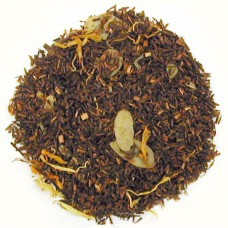 Rooibos, Honeybush’s more robust cousin, has long been believed to alleviate headaches and stomach aches. It also answers to the name Red Tea, Bush Tea, and Red Bush Tea. It has an earthy, creamy, sweet flavour. Unlike most teas, there is nutrition information accompanying this herb. Though trace, a typical cup of Rooibos contains Iron, Potassium, Calcium, Copper, Zinc, Magnesium, Fluoride, and Manganese. Unlike plain honeybush, rooibos often comes flavoured: strawberries, lemon, orange, peach, pina colada, bourbon street vanilla, the list is endless. It is said to taste more “medicinal” and the flavoring helps cut down on that. Unlike honeybush, if you steep it a bit less than the 5-7 minutes, you will still get a full-bodied cup. The needle-like leaves are fermented, which gives the plant its reddish color and enhances flavor. Unoxidized Rooibos is available as “green” rooibos but is grassy, malty, and pricier than the red version.

Those who have tried both range from “very similar” to “distant cousins who don’t even talk and I much prefer…” I am drinking a porcelain cup of unadulterated, delicate honeybush right now and it suits me fine, just as a rich rooibos in a thick earthenware mug on a snowy day does.