By William I. Lengeman III

The next time you can’t decide whether to have a drink or a cup of tea, maybe it’s time to consider sampling a beverage that combines both in one bottle. 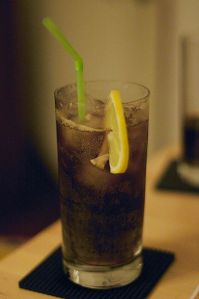 If you thought Long Island Iced Tea was the ultimate combination of tea and alcohol, well, not so fast. This popular cocktail rarely contains any tea. But there are mixed drinks that contain tea, and it’s become an increasingly popular trend in recent years for beverage makers to concoct products that mix both of these ingredients.

Tea drinkers looking for something stronger can take a taste of two brands of tea-flavored vodka, for starters. Charbay Green Tea Vodka, from the Napa Valley-based Domaine Charbay Winery and Distillery, was five years in the making and is flavored with green tea from China’s Anhwei province. For tea-flavored vodka that combines a special Parisian tea blend with the hard stuff, there’s the Three Tea artisan vodka from Modern Spirits, a company whose other flavored sipping vodkas include Chocolate Orange and Celery Peppercorn.

If tea-flavored liqueur is more your speed, try out Zen Green Tea Liqueur, a Japanese product that’s served up in a green bottle with a particularly pleasing design. Zen uses matcha green tea as a flavoring. If you’d prefer liqueur that uses black tea, you’re not out of luck. Try Voyant Chai Cream – it combines rum, Dutch cream, premium spirits and “a distinctive blend of spices” with Indian black tea.

Smirnoff’s Raw Tea rolled out in 2006 to a great deal of fanfare, much of it thanks to a viral video. This was a rap-themed spoof on a tea party called Tea Partay, performed by a “group” called Prep Unit. A premium malt beverage that’s been ice-filtered five times, Smirnoff Raw Tea is available in flavors that include lemon, raspberry and green tea.

Beer and Japanese sencha green tea may sound like an odd combination, but these are some of the ingredients that go into iKi Bier, which is made in the Netherlands. It combines “green tea and yuzu citrus fruit in a light, refreshing beer.”

3 thoughts on “Tea and Spirits”