For many tea drinkers, Camellia sinensis is nothing more than a way to get a quick boost in the morning, a nice accompaniment to biscuits or those clever little sandwiches with the crusts removed, or the basis of some high-falutin’ latte type drink at their corner Starbucks. 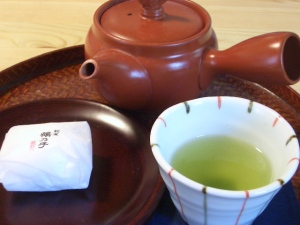 But for many other tea fans, tea is much more than any of these things. You’d be hard pressed to find another beverage which stirs up people’s contemplative, meditative or spiritual natures in the way tea does. Try to imagine, for instance, a Japanese coffee ceremony, as opposed to the Japanese tea ceremony that’s considered by some to be near the pinnacle of meditative arts.

There have been several worthwhile books published recently that take a look at this side of tea drinking and culture. Most notable among them are The Spirit Of Tea, by Frank Hadley Murphy, a book whose publisher called it “a radical departure” from other tea books and one that examines “tea’s transcendental nature.” Also worth noting, The Way Of Tea, by Aaron Fisher, in which the author examines such concepts as The Tao of Tea, Quietude, Clarity and The Tea Space, among others. Click the links for short reviews of each of these works.

Of course, excellent as their books may have been, neither of these authors were exactly blazing a trail when it came to exploring the connection between spirituality and tea. One of their most noteworthy predecessors was Okakura Kakuzo, whose 1906 work, The Book Of Tea, is a small book that introduces readers to his concept of Teaism and looks at how tea has become so integral to Japanese life, both as a beverage and on a more spiritual level.

Another worthwhile tea book in the vein of the aforementioned came along about eight decades after The Book Of Tea and paid tribute to the nation where tea drinking and culture began. The Chinese Art Of Tea, published in 1985 by scholar John Blofeld, includes chapters on Chinese tea history, poetry and a look at Tea and the Tao, to name a few. For more about his book refer to this review at the Cha Dao blog.

One thought on “Spirituality and Tea”