With the ever-increasing interest in premium tea these days there has also been an increase of interest in the preparation style called gongfu or gongfu cha. This method of tea preparation has been well established for many centuries in China, where it originated. In recent years gongfu cha has become more popular with tea enthusiasts hoping to boost their enjoyment and rediscover some of the traditions surrounding tea. 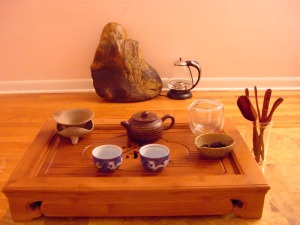 Gongfu shares some aspects with Chanoyu, which is more commonly known as the Japanese tea ceremony. But the former is arguably more concerned with actual tea preparation, consumption and the overall enjoyment of the tea itself than with being an aid to meditation and contemplation.

Far be it from me to oversimplify a tradition that’s many centuries old, but it’s safe to say, nonetheless, that there are some key aspects of the gongfu preparation style. Tea leaves are generally steeped in a small Yixing teapot or gaiwan and are served in cups that are also quite small – sometimes not all that much bigger than a thimble.

Gongfu fans tend to use a much higher ratio of tea leaves to water than we are accustomed in normal tea prep and steeping times are usually quite short – perhaps as little as 15 seconds for the first few steeps. Due to these factors and the modest servings it’s not unusual to get numerous infusions from a batch of leaves, many more, in fact, than one gets using standard preparation methods.

There are any number of good primers on gongfu methods. For an example, refer to a Seven Cups video podcast on the topic. Also worthy of a look, The Chinese Tea Ceremony – Gongfu Cha, which was posted at the T Ching blog some time back.

For a few thoughts on this topic from a genuine Chinese tea master, refer to The Leaf’s two-part article – Gong Fu Tea Tips with Master Ling Ping Xiang here and here. Among the many tidbits of advice he offers, “Go inside yourself. Truly experience the tea.” Also from The Leaf, Gong Fu Tea Tips with Zhou Yu; Fire the Teacher of Tea.

One thought on “Gongfu Cha”