Fee, fie, foe, fum — which tea kettle is the one? Go to any kitchenwares store or Website, and you’ll see tea kettles galore, both stove top models and electric ones with a variety of features. But is more better? And why should you care?

Some say the most important ingredient in a good pot of tea is the water. Heating that water to the proper temperature is touted as one of the most important steps in properly preparing that tea. It all started with the legend of how tea was discovered.

Once upon a time in China, some leaves of the Camellia Sinensis plant fell unobserved into a little pot in which water was boiling (to purify it for drinking). The pot belonged to Shen Nong, the “Divine Farmer,” who took a drink of the water after the leaves had steeped in it and liked the taste.

Back then, the basic task of heating water for your tea was a relatively simple affair. Pot. Water. Fire. Things in the tea kettle department trotted along at a bit of a snail’s pace after that, with changes in design and materials used occurring at extended intervals. Life was relatively simple, in that area at least.

Then, the innovation picked up the pace. New materials. Kettle whistles. Electricity. Something new seems to be coming out every day. So do the articles about which one is best. All you have to do is search online using the term “tea kettle comparisons” to pop up tons of opinions, experiments, and even some fairly scientific assessments. Some of these are helpful, some are trivial (as in “I liked this tea kettle better”), and some are downright misleading (comparing gas stove heating to electric kettles, for instance).

To save you some time, I have digested a big chunk of this information and am presenting some pared down versions. There’s a lot of info, so I’ve split this into two parts.

First, electric kettles vs. stovetops — For some reason, claims that electric kettles heat more efficiently and faster than stovetop models seem to be based on comparisons with gas stoves (at least, all the ones I found did). The idea is that the flame from the gas burner heats air around it in addition to heating the kettle sitting on it. This is empirically evident. Heating air instead of the kettle is inefficient, so I can agree with the assertion that gas stoves heat less efficiently than electric kettles.

Setting aside gas stoves, electric kettles should be compared with electric stoves and microwaves. What makes the electric kettle so efficient at heating water is that the heating element directs the majority of the heat to the kettle and thus to the water. As for electric stoves, there are two kinds: those with coil burners and those with a smooth glass top. Hubby and I have the latter. The coil burners have the same issue as a gas flame, that is, some of the heat will go into the air around the coil, not to the kettle. 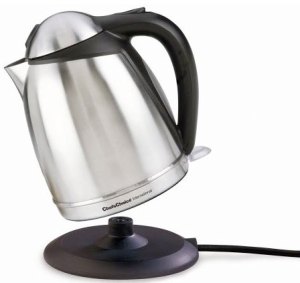 Glass top stoves are another matter. As long as your kettle fits the size of one of the heating areas on the glass top stove, you will get heating close in efficiency to a microwave and possibly an electric kettle. And, no, watching the kettle does not prevent it from boiling.

Second, things affecting heating time — Some of the comparisons I’ve seen don’t take everything into account. Other things that can effect how fast your water boils:

See part II for items 3, 4, and 5, plus some things to look for when purchasing an electric kettle.

Make sure to check out A.C.’s blog, Tea Time with A.C. Cargill!