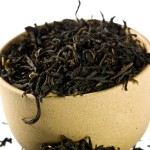 While tea is generally thought to provide a more easygoing boost than coffee or beverages such as energy drinks, the fact remains that many people who consume it do so because it contains caffeine. For most tea drinkers, tea prepared more or less in the standard fashion is likely good enough for such purposes. While most of us probably don’t painstakingly measure out the 2.25 grams of tea per six ounces of water that’s proscribed by the International Organization for Standardization as the “correct” way to make a cup of tea, it’s likely that we’re in that general neighborhood.

But there are those who would prefer that their cup of tea pack more punch – or in some cases a lot more punch. It’s said that in Russian prisons their preferred poison is chifir, which is just black tea prepared very strong – by some accounts as much as ten times more than a regular cup of tea. Since I wrote about it here a few years back, I’ll direct you to that article for more details.

Not that Russian prisoners have cornered the market on hair-raising tea. According to various sources, in southern Egypt they’re fond of something called saiidi tea. This is typically made by with about twice the standard amount of tea per cup, boiled for as much as five minutes and heavily sweetened to cut the bitterness that’s sure to result.

Over the years there have been tea merchants who have attempted to fill a perceived demand for strong tea. One well-know tea company still makes a “jet fuel” that combines a blend of black tea with peppy ingredients such as extra caffeine, cola nut and eleuthero. Another company offers green tea-based tea shots that are said to pack the equivalent of “three big, strong cups of fresh green tea” in one two-ounce serving. A recent newcomer to this specialty market has put together a line of teas that they proudly proclaim is “The Most Caffeinated Tea on the Market.”

Of course, if you’re thinking about venturing into the arena of strong tea then it probably goes without saying (though I’m saying it anyway) that some measure of prudence is called for. As evidence, I’ll close by once again referring to the case of the woman who drank “super-strong tea” for seventeen years and paid a hefty price for doing so.