As the summer holidays draw to a close, many are planning a last hurrah. Children are returning to school, and many employers give their employees a day to celebrate known as Labor Day, which is observed on the first Monday in September in the United States. Some go on vacation while others stay at home and cook up a barbecue. Depending on the state and its climate, it may be the last barbecue for quite some time so they make this one count. Steaks, hot dogs, and especially burgers are thrown on the grill. The standard American condiments, ketchup, mustard, and pickle relish and brought out and set out for guests. You take your pick at the condiments and you can’t help but wonder about the pickle relish.

In the US, pickle relish or simply “relish” is made from pickled cucumbers (also what we refer to as just pickles). It is either sweet relish or dill relish. We usually just put it on hot dogs and hamburgers but there isn’t much to the imagination with simple pickle relish. The British, however, have different sorts of “pickles”. One such pickle is called piccalilli. A mixture of mustard, turmeric (helping to give its distinctive yellow color), and pickled vegetables, piccalilli is a popular sort 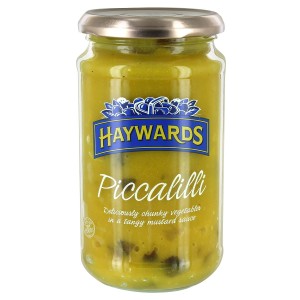 of pickle in the United Kingdom and it’s widely used in a range of foods, from pasties and sausage rolls, to sandwiches. Piccalilli was also considered an Indian Pickle, and created as early as the 18th century. Great for use in hot dogs or hamburgers as this is very pungent and tart like regular yellow mustard (Note: Piccalilli is also known to some as chow-chow).

More of a sweet pickle person? Then the Branston Pickle might be for you. This pickled chutney has been loved by the British since 1922. The appearance is dark brown colored and chunky but inside is a load of ingredients that bring the famous pickle its sweet and sour flavor. The vegetables in Branston Pickle range from cauliflower to onion. It’s a whole list of ingredients in this wonderful jar! Branston is widely used in the UK with cold cuts and cheese, especially in a Ploughman’s Lunch (I must write about that someday). Some make a simple cheese (cheddar is usually used) and pickle sandwich and makes a great lunch. 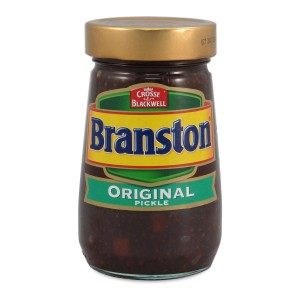 Speaking of Ploughman’s Lunch, pickled onions are another widely popular pickle/condiment. Small onions, usually silverskin, are pickled in a malt vinegar and are crunchy when eaten. Another popular dish these are usually eaten with is fish and chips! Haywards is one of the popular makers of this heavenly pickle!

While there are steaks on the grill, why not spice it up with a little HP Sauce? A tangy brown sauce which has been on British tables since 1899, this sauce is used on all sorts of meats and in sandwiches. The HP stands for “Houses of Parliament” because it was believed the sauce was used at a restaurant there at the time of its invention.

Stay tuned to September 2nd! We’ll be featuring Piccalilli in a new recipe!